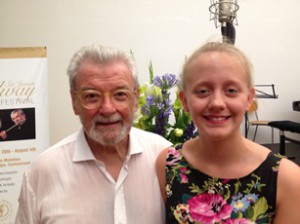 Washington, D.C. (August 22, 2013) – Called a “rising star” by world renown flutist Sir James Galway, local Fairfax Station flutist Emma Resmini has just returned from a summer to remember. Emma may only be 13 years old, but she has already reached significant milestones as a musician.

With the support of American Airlines and local business owners Susan Davis and Jim May, Emma was able to study for 10 days with acclaimed flutists Sir James and Lady Jeanne Galway and Lorna McGhee.

Emma is scheduled to perform with the Laredo Philharmonic Orchestra in January 2014 in Laredo, Texas, and to participate in the Rock Creek Chamber Music Series in Washington, D.C. Emma is the daughter of Marilyn and Ronald Resmini.