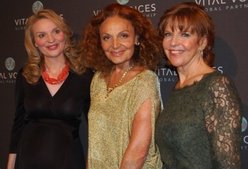 The 13th annual Vital Voices Global Leadership Awards was held at The John F. Kennedy Center for the Performing Arts on June 17, 2014, in Washington, D.C.  Hillary Clinton, who founded Vital Voices Global Partnership in 1997, gave a special award to Razan Zatounieh, the Syrian human rights activists who was abducted in December 2013 and is still missing.

Check out the social media coverage on Storify.