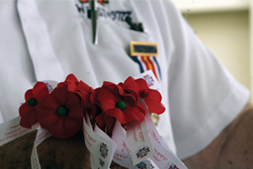 We cherish too, the Poppy red
That grows on fields where valor led,
It seems to signal to the skies
That blood of heroes never dies.

In a small town, the kind of town where doors were never locked, seen through the eyes of the children, Memorial Day was an exciting experience. The usually predictable, measured pace of life abruptly changed. The quiet of the early morning hours quickly gave way to the stirring of a community coming to life. Far off came the sound of a single trombone, soon to be joined by all of its neighbors in the brass section of the high school band, tuning up before marching across town to the steady beat of the bass drum.

In a hundred homes, mothers made last minute adjustments to the uniforms of cub scouts and campfire girls, while older brothers and sisters who had mastered the ability to put their uniforms entirely together slipped away to meet friends who were all slowly moving toward the starting point for the parade. Horses snorted and danced while local officials worked the gathering crowd. Veterans of conflicts past, now members of the VFW and the American Legion, slowly assembled, uniforms straining to contain bodies no longer young and hard.

And everywhere there were poppies. The farmer, the banker, the dentist, the teacher, the barkeeper and all his customers, wore poppies. Poppies adorned coveralls and caps, sweaters and uniforms, corduroy pants and nylon jackets. The erstwhile ladies of the American Legion Auxiliary counted it among their missions to ensure that everyone proudly wore a poppy. Utterly lost on the youngest parade-goers was the reason wearing the poppy was so important.

Older attendees knew well the meaning of the poppy. They could look at their neighbors and see the widows still in mourning, the lined faces of the Gold Star Mothers. They knew the military history of the little town, understood the lost dreams and bittersweet memories stirred by the passing of the color guard, the snapping of the flag, the fading echoes of taps floating across the river.

It’s harder now to find a poppy on Memorial Day, and, it seems, easier to forget what the bright red poppy represents. In some respects, Memorial Day feels more like the national “It’s summer time at last” holiday than a day intended to honor those who have died in military service to our nation. We hope everyone who reads this reflection takes time on Memorial Day to remember the sacrifices made by so many people, through so many generations, and thus honors the lives they gave for their country. And if you can find a poppy, wear it, and help remind others what it stands for.