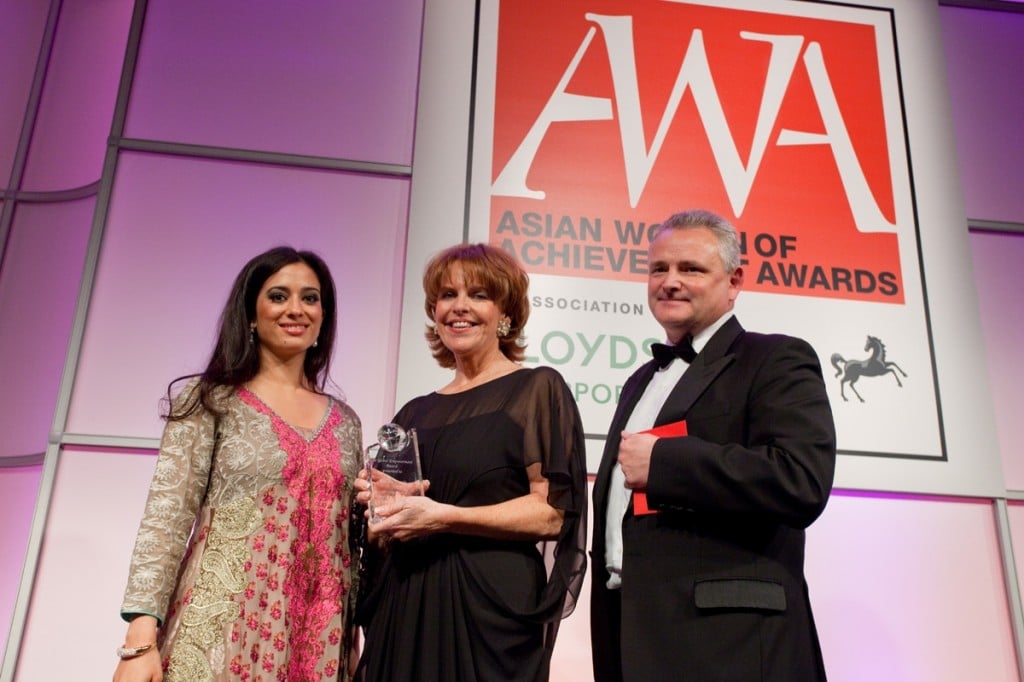 Washington, D.C. – Susan Ann Davis, Chair of Vital Voices and of Susan Davis International (SDI) was honored with the 2011 Global Empowerment Award in London on Thursday evening. The Global Empowerment Award, given during the Asian Women of Achievement Awards, honors an individual leader whose vision inspires economic and social progress across the world. This award recognizes the work of a remarkable individual who exemplifies outstanding leadership, responsibility and courage and has inspired others to champion progress and success. Past recipients include Prince Charles of England (2009) and Indra Nooyi, global chief executive of PepsiCo (2008).

Susan Davis is chair of Vital Voices, begun by Secretary of State Hillary Clinton when she was First Lady, which identifies, invests in and brings visibility to emerging women leaders around the world. This international non-governmental organization (NGO) has trained and mentored more than 8,000 emerging women leaders from more than 127 countries in Africa, Asia, Eurasia, Latin America, the Caribbean, and the Middle East since 1997. These women have returned home to train and mentor more than 500,000 additional women and girls in their communities.

Susan Davis is also founder and CEO of the award-winning global strategic communications agency, Susan Davis International (SDI) headquartered in Washington, DC. A lifelong advocate for democracy building, social entrepreneurship and leadership development for women, she has often been recognized for her leadership on women’s entrepreneurship issues. She was the first International President of the International Women’s Forum, the preeminent global leadership organization for women of achievement and recently honored by Irish America Magazine as one the “Top 100 Irish Americans.”

In accepting the award, Davis said “It is immensely gratifying to accept this award in recognition of the enormous energy, passion, and commitment the women of Vital Voices have poured into recognizing and inspiring a future generation of women leaders. We have pursued with singular focus our mission of transforming the lives of emerging women leaders who are changing the world. The Global Empowerment Award is testament to the power of their passion and their commitment.”

About the Asian Women of Achievement Awards
The Asian Women of Achievement Awards, co-founded by Pinky Lilani OBE in 1999, were conceived to celebrate the often unsung Asian heroines of British life. Such women make a huge contribution in fields as diverse as business, entrepreneurship and social and humanitarian work. These awards are their moment in the spotlight. To learn more about AWA, visit http://awa.realbusiness.co.uk.