Spotlight On: The Foundation Fighting Blindness 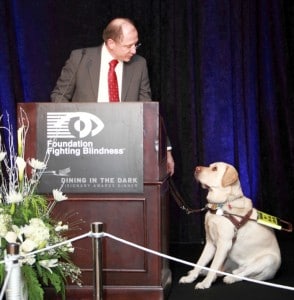 We’ve enjoyed our continuing work for The Foundation Fighting Blindness (FFB) to aid in communicating their mission to drive the research that will provide preventions, treatments and cures for people affected by retinal degenerative diseases.

In December, The Foundation’s held their second annual Dining in the Dark fundraiser at the Tysons Ritz-Carlton in Washington, DC. The fundraiser afforded guests a unique experience – dining in complete darkness to raise awareness for FFB’s mission of treating and curing blindness. Among the guests were Northrop Grumman vice president Bill Carty and his guide dog, Bruce and and the National Institutes of Health’s Ignacio Rodriguez. See the story in The Washington Post here.

On January 19, the Foundation Fighting Blindness held the Banking on a Cure New York Visionary Awards Dinner in the Ballroom of The Plaza Hotel. Aryeh B. Bourkoff, Vice Chairman, Global Head of Telecom, Media, and Technology Investment Banking, UBS Investment Bank; and Stanley Chang, M.D., Chairman, Department of Ophthalmology, Columbia University Medical Center, were honored by the Foundation with Visionary Awards. With 350 attendees, the dinner raised nearly one million dollars to help the Foundation drive the research that will provide preventions, treatments and cures for people affected with retinitis pigmentosa, macular degeneration, Usher syndrome, and the entire spectrum of retinal degenerative diseases.

SDI’s outreach for the event resulted in coverage in several New York publications including the New York Times and the Wall Street Journal.

We’re proud to support the Foundation’s mission and continue our work for an organization that has raised over $400 million for retinal research since its inception. Most recently, the Foundation is funding gene therapy clinical trials treating patients affected with Leber’s congenital amaurosis, a severe form of retinitis pigmentosa that causes blindness or substantial vision loss at birth. Results from the breakthrough study showed that gene therapy has restored significant vision in children and young adults who were previously blind. The advancement paves the way for using gene therapy to treat a wide variety of retinal degenerative diseases, suggesting a cure is in sight.