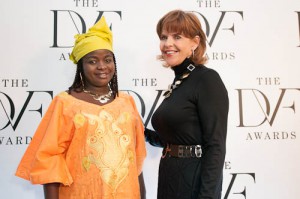 Susan Davis, Board Chair for the Vital Voices Global Partnership, was a delegate to the 2012 Women in the World Summit in New York hosted by Newsweek and the Daily Beast. The summit, a platform for storytelling by courageous trailblazing women who came from more than a dozen countries, attracted educators, activists, businesswomen, entertainers, media personalities and politicians from IMF Head Christine LaGarde to Nobel Prize winner Leymah Gbowee to Meryl Streep and Secretary Hillary Clinton. Among the many highlights, co host Diane von Furstenberg hosted a  beautiful dinner to honor three incredibly courageous women and the indomitable Oprah Winfrey who was presented with the Lifetime Leadership.