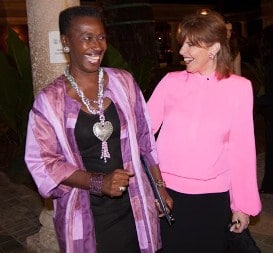 That Haitian special magic could not be missed last evening in Port Au Prince. The earthquake and its devastation were set aside in a night where serious discussion mixed with joyous celebration. For the last four days, Haitian women from every part of the country, every economic status, and every background met at the Karibe Hotel to finalize their National Women’s Platform. Last evening, led by the powerful and inspirational Danielle Saint-Lot, the women invited President Martelly, the First Lady and members of the Cabinet to dinner at the Karibe Hotel to present the National Women’s Platform for Haiti.

This is no typical women’s agenda. Unique in its process: over 350 focus groups were held over many months among women and men throughout the country. The platform is a blueprint for how Haitian women plan to help lead this disaster and poverty stricken country forward to economic and social growth.  The platform spoke to infrastructure and economic development, education and healthcare, as well as fighting gender based violence and appointing and electing more women to office. After presenting the platform in total, the determination of the Haitian women was summarized in an impactful metaphor surrounding the country’s passion for soccer.  As they told the “captain” the women no longer wanted to warm the bench. They were suited up, ready to go in and make the big plays. “Captain, you now have twice the talent to win the match.”

President Martelly gratefully embraced the platform and declared the Haitian women would be the cornerstone of this fledgling democracy. And then the magic really began as the Haitian women, and the President, a former musician, celebrated with singing and dancing. It was a powerful, joyful moment, as Haitian women stepped up to say they should and would be a significant player in Haiti’s quest for stability and growth.

Vital Voices, with four of our Global Ambassadors, was privileged to be in Haiti this week, supporting the Haitian women as they finalized their platform and prepared to present. Thanks to our great partner Bank of America, with whom we have created our new Global Ambassadors program, we brought to Haiti Florence Chenoweth, Liberia’s Agriculture Minister; Ambassador Connie Morella, former Member of the US Congress; Cambodia Parliamentarian Mu Sochua along with Bank of America executive Justine Metz.  They came to mentor the Haitian women throughout this week as Vital Voices helped them think through next steps in strategic communications, advocacy, partnership building and fund-raising. Significantly, we were also privileged to have our Bank of America partners CEO Brian Moynihan and Anne Finucane, Global Strategy and Marketing Officer, join us to support the important work the Haitian women are undertaking. As Chairman of the Board of Vital Voices I could not have been more proud of our work, and of our Haitian Vital Voices chapter begun more than 13 years ago. They have come far, and they will go far. And we will stand by them as they show women around the world what it means to lead.