July 4th on the National Mall: Tradition For Many, Proud History For SDI 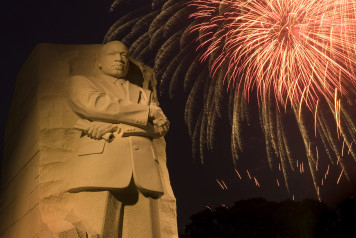 There can’t be a better place to celebrate the Fourth of July than right here in our home town and the nation’s capitol, Washington, D.C.  On this important day for the United States, we share our city with visitors from across the nation and around the world.

The preparation begins weeks in advance as special vantage points are prepared for the throngs and thousands who will converge on the National Mall.  The Potomac River is dotted with kayaks, canoes, and larger boats filled with celebrating citizens.  The Capitol lawn is a patchwork quilt of blankets staking out picnic spots well in advance of the National Symphony’s annual concert.  All the museums on the National Mall below are open, and one person always stays behind, the designated place holder, while the rest of the group takes advantage of the rich array of free museums – ready to be explored.

When the concert begins, a hush settles over the Capitol lawn.  Picnickers of all ages settle into the hillside as the symphony and this year’s star performers create reveries of sounds to accompany the magnificent sights of the illuminated city below.   We anticipate the spectacular climax of the concert – it happens every year – but it always feels new.The symphony plays Tchaikovsky’s  “1812 Overture”  and as the cannons boom, the fireworks on the Mall below begin.   The images of the gorgeous pyrotechnics behind the Washington Monument will last in our memories – until next year.

And as the annual extravaganza of red, white and blue lights up our monumental corridor, I am so very grateful for the opportunities that come with being part of daily life and work in our nation’s capital city.  Washington hosts many compelling sites that tell the story of our nation’s struggles, challenges and triumphs.  At SDI, we have been privileged to help introduce to our nation and the world, so many of the unique monuments and memorials  that represent critical elements of our nation’s history, and now are stories and lessons for the ages.  They include the Women in Military Service for America, at the gates of Arlington National Cemetery, which has been a critical voice since its dedication in 1997, reminding the world that women’s service has been essential since the founding of our nation, no more so than today;  the United States Holocaust Memorial Museum –   a beacon of hope to those around the world threatened by  genocide and terrorism; the National Japanese American Memorial to Patriotism, honoring those citizens who served in our nation’s military even as their family members continued to live in internment camps; the Franklin Delano Roosevelt Memorial telling through sculpture and landscape the story of 12 of our nation’s most troubled years;  and the Martin Luther King Jr. Memorial, which we helped bring to life in 2011. The MLK Memorial was the missing piece  in our country’s complex story told on the National Mall, completing the journey  for those who walk the  path of the Tidal Basin –  from Jefferson, to FDR, to MLK, to Abraham Lincoln, seeking evidence of our national quest for  truth, justice, and  democracy.  As the fireworks from the National Mall create a backdrop for the MLK Memorial, I am grateful for the chance to have played a part in the creation of these institutions, and more than grateful to be a citizen of a nation that has risen above conflict and injustice in order to celebrate these stories on this Fourth of July.