International Womens Day: Much To Be Accomplished 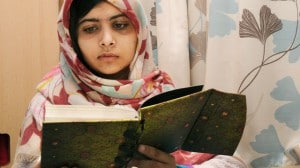 (Photo courtesy of The Malala Fund)

As we celebrate International Women’s Day 2013, we are reminded that 32 million girls around the world are still prevented from getting an education.  And an estimated one in every five women faces some form of violence in her lifetime.  The tragic near-assassination of Malala Yousufza in Pakistan embodies the undeniable connection between violence against women and the drive to provide primary education for girls around the world.

This week, as Board Chair of Vital Voices Global Partnership, I had the privilege of accepting PRWeek’s ‘Communicator of the Year’ Award on behalf of Malala.  This new award is being given not to a great communicator of a certain title, position and age, but to a 15-year old young woman from Swat Valley, Pakistan, who narrowly escaped a Taliban assassination attempt for her outspoken denunciation of the ban on girls’ education.   Although the attack left Malala grievously wounded, the damage to her body only further emboldened her spirit.  Her voice and her determination to campaign against the injustice of girls being prevented an education in Taliban-controlled Pakistan and beyond is now stronger than ever.

Learn more about how you can help