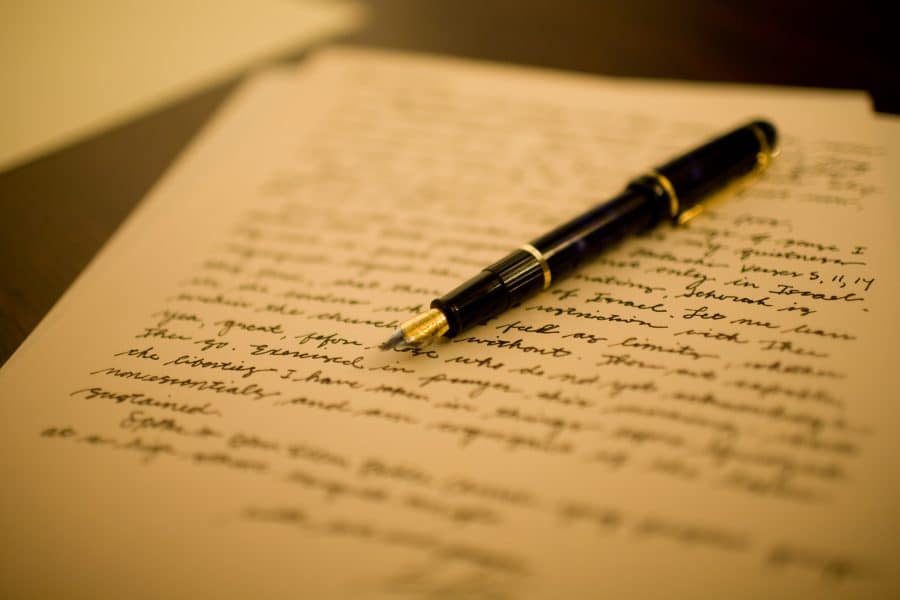 Memorial Day reminds us that the price of freedom in this nation has been paid by generations of men and women who have answered the call to duty. Many who have served their country, and felt the aching loneliness of separation, kept in touch with friends and family through letters. The range of emotions captured in the following excerpts tell us much about a soldier’s journey.

There comes a Soldier, his bare feet are seen thro’ his worn out Shoes, his legs nearly naked from the tatter’d remains of an only pair of stockings, his Breeches not sufficient to cover his nakedness, his Shirt hanging in Strings, his hair dishevell’d, his face meagre; his whole appearance pictures a person forsaken and discouraged. He comes, and crys with an air of wretchedness and despair, I am Sick, my feet lame,my legs are sore, my body cover’d with this tormenting Itch – my Cloaths are worn out, my Constitution is broken, my former Activity is exhausted by fatigue, hunger and Cold, I fail fast I shall soon be no more! and all the reward I shall get will be – ‘Poor Will is dead.’

Fighting is a beastly business, and I am sick of it. Here I have been fighting the rascals for eight days + have not seen a single one of them except as prisoners. Their balls have fallen around me like hail and their shells have exploded over and around me in perpetual succession for hours at a time. My regiment has been worse than decimated, for since the enemy was so completely concealed by the thick pine woods that it was impossible to see them. The way we fight now is this; we find the enemy in occupying a wood and go in to attack him. The bullets whiz past and inform us that he is in front, where upon we begin to fire, and blaze away for hours without seeing each other.

I have tasted the dirt of war and wasn’t afraid to start at the very bottom. You + my friends will never know what a hell this is no matter how long it lasts. I began at the bottom because I knew sometime I would find my place. At times I have been so miserable it was impossible for me to see anything worth while in life but those times didn’t last long. I went into the trenches without the least bit of fear and come out untouched.

Just a few to let you know that I feel all right again, and outside of the bugs and such, nothing has changed. We had more mail today but again I didn’t get any. I’ve had only one letter addressed to me overseas. It sure gives a hollow feeling inside when you wait and wait for mail and then don’t get any. I can’t imagine what’s the matter. I’m getting so I don’t give a good darn at all. I guess that’s the way to feel. Could I ever write a book about this and that, it would knock your eyes out. I only hope I get home to tell you.

Well how is everyone? It seems useless to ask any questions for I don’t seem to get any answers, but maybe I’ll hit a jackpot and get all my mail at once.  We don’t get mail when we’re out fighting. I think of you all often. I wonder if there is any fourth celebration.

Tomorrow, I’m twenty-eight years old. I feel much older somehow than I did last year. I guess it’s only natural. I hope to spend the next one at home. I could have gone to communion this week but I was sick so I missed the chance. However, I’ll get another one I think. We don’t carry a chaplain with us, so sometimes it’s a long time between church.

We hope to get paid, but I don’t know what for there isn’t a thing to do where we are. I’ll not care whether we do or don’t. Money doesn’t mean much after all. That and power is what causes all this.

I’m still waiting to hear from you if the bathroom ever was completed. Maybe you can’t buy a bathtub. Hell of a thing if you can’t.

I imagine the town is pretty dead now. There aren’t any young fellows left at all.

Well, dear ones, I guess I’ve said all there is to say. I’m well, healthy, and when you’re that you’re plenty fortunate, so all in all, I still rate high up.

I’ll be thinking of you from here on out as ever.

Just a line to let you know I have been wounded and am in the hospital in Japan. I was shot through the right thigh with a single sniper bullet; . . . . I am thankful to be alive.

We had to break up a road block near Hakchon where 300 Chinese were supposed to have been dug in; they had a regiment of the 3rd division cut off and we had to make contact with them without delay. Everything was thrown at them before the infantry try and tanks went in – planes, artillery, and mortars in big doses. Then the 3rd Bn. Went in with “L” Co. on tanks. I was on a tank about 8 minutes — then I was hit. . . . I screamed at them to stop the tank so I could get off and crawl into a ditch . . . .  Taylor of my squad also got wounded while helping to carry me out. After Taylor got hit there was not enough men to carry me, so they dropped me and said they would send help or come back with more help. I lay there for a short while and then dragged myself about ten yards to a little better cover, and I lay there til well after dark. . .

Getting short, Mom, coming home pretty soon. Going to quit flying soon, too much for me now. I went in front of a board for sp/5 will know soon if i made it. I have now 20 oak leaf clusters and some more paper for you. I have flown 1500 hours now, and in those hours I could tell you a lifetime story. I have been put in for a medal again, but this time I have seen far beyond of what ever you will see. That is why I’m going to quit flying. I dream of Valerie’s hand touching mine telling me to come home; but I wake up, and it’s some sergeant telling me I have to fly. Today I am 21, far away but coming home older.

Today the men and women who serve are sending emails and text messages, or, using Snapchat.  But what hasn’t changed is their willingness to put their lives on the line to protect their fellow citizens, just as some generations have before them. Take a moment to remember those who have fallen, and give thanks to those who serve.