How States Fare When It Comes to Lung Cancer

For those diagnosed with lung cancer, the state they live in has a direct impact on their access to optimal care.

Measuring that impact was the motivation behind the nation’s first-ever Lung Cancer Scorecard, which was formally announced by SDI client LUNGevity, the largest lung cancer-focused non-profit, during a Capitol Hill briefing in February. In the weeks since, these results have unfortunately taken on greater meaning as the nation deals with coronavirus, a respiratory illness that disproportionately affects those with compromised lungs or underlying health issues.

“Our goals are simple: to improve outcomes for people diagnosed with lung cancer and to improve how they live with the disease,” said Andrea Ferris, president and chief executive officer. “We are forgetting our most vulnerable—those who are on Medicaid.” 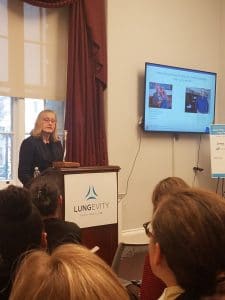 The report card was based on five factors: Medicaid coverage for lung cancer screening, for comprehensive biomarker testing, expansion in general, state lung cancer incidence, and state lung cancer 5-year survival rate. Each criteria was given a point for qualifying and nothing for not.

Only four states received an A grade: Maryland, Minnesota, Washington, and Oregon. Of all the states that did not expand Medicaid, all but one earned a D or an F. Fourteen states in total failed. The grades can be seen by individual states at lung cancer score.org.

“Medicaid beneficiaries, especially since the ACA expanded Medicaid, really represents some of the most vulnerable Americans. And if we’re leaving them behind, we’re just not doing the job we need to do,” said Michael Kolodziej, who is vice president of ADVI and also helped lead the research for LUNGevity’s report.

Dr. Julie Brahmer, director of the Sidney Kimmel Cancer Center at Johns Hopkins Bayview, started off the session with a discussion about why screening, coverage, and treatment are so integral to the survival of lung cancer patients.

“These patients—lung cancer patients and all cancer patients—need access to screening because it really does make a difference,” Brahmer said. “Diagnosing at an early stage equals improved outcomes.”

Biomarker testing, which sequences cancer DNA in order to find the specific mutation, has allowed 31 percent of mutations to currently have a pill targeting those mutations.

“You want to know what the genes of your tumor are because just tomorrow maybe could mean access to a new drug,” Brahmer said.

“If he had been diagnosed today in 2020, just think what his life could’ve been like. However, the results might have been different, depending on where he lived,” Brahmer said.

Some states are missing the coverage on important protocols for lung cancer. Almost two thirds of states cover screening while 42 percent of them cover comprehensive biomarker testing, and only 20 percent cover clinical trials.

While the five-year survival rate has tripled for lung cancer patients with advanced non-small cell lung cancer and 2019 hosted the single largest drop of cancer mortality, it’s “just the tip of the iceberg,” Brahmer said.

“We’ve never seen the advancements that we’ve seen recently in lung cancer survival for our patients, but we have such a long way to go,” she said. “We have to be able to implement what we’ve actually found and truly make what we’ve seen equate to further improvements in survival.”

Some of the current state regulations even puzzle Kolodziej, who noted that clinical trials would not bring any additional costs on the health insurer’s side.

“Every single person in this entire health center ecosystem says, ‘We want the right therapy for the right patient at the right time.’ Have you heard that mantra before? I’ve heard it a few times,” Kolodziej said. “So, it’s time to put your money where your mouth is.”