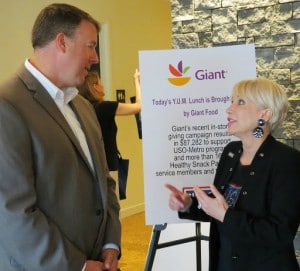 Landover, Md. (May 20, 2013)–Today at the USO Warrior and Family Center at Fort Belvoir, Giant Food of Landover, Md. presented $87,282 and 16,500 healthy Snack Packs to the USO of Metropolitan Washington as a result of its March in-store giving campaign. Giant teamed up with USO-Metro for a third year, during the neighborhood grocer’s first-ever Military Appreciation Month, to support military families across the region.“As the nation’s capital grocer, we are proud to support not only the military members who are part of the Giant family, but individuals and families across the region who bravely serve our country,” said Anthony Hucker, president, Giant Food of Landover, Md. “The tremendous success of our third partnership with the USO of Metropolitan Washington is due in large part to the generosity of our customers and commitment of our associates to ensure a successful campaign. We look forward to continuing our military hiring initiatives throughout the year and to working with USO-Metro again to support the vital services they provide.”

Customers were given the opportunity to donate $1, $3, or $5 at the register as well as purchase a healthy Snack Pack, which contained a Giant brand nutrition bar, pretzel bar, drink sticks, fruit snacks, bottled water, and CareOne hand sanitizer. USO-Metro will distribute Snack Packs to service members and their families over the coming months.

“All of us at USO-Metro are so touched by the amazing support of Giant and their employees,” said Elaine Rogers, President and CEO of the USO of Metropolitan Washington. “These amazing healthy snack packs clearly demonstrate the enormous support of the American people and companies including Giant for our nation’s troops and their families.”

During Military Appreciation Month, Giant also launched an aggressive military recruiting and hiring initiative focused on careers – not jobs – for military service members and their spouses. To reaffirm their commitment to supporting those who serve, Giant Food President Anthony Hucker signed a Statement of Support with the Employer Support of the Guard and Reserve. The statement signified Giant’s continued promise to members of the National Guard and Reserve in both their military and civilian duties.

Editor’s Note: Photos from today’s event at Fort Belvoir are available upon request. Please contact Sara Neumann at sneumann@susandavis.com or (202) 414-0788.

About Giant Food
Giant Food LLC, headquartered in Landover, Md., operates 171 supermarkets in Virginia, Maryland, Delaware, and the District of Columbia, and employs approximately 20,000 associates. Included within the 171 stores are 155 full-service pharmacies. Giant opened the first supermarket in the nation’s capital on February 6, 1936. For more information on Giant, visit www.GiantFood.com.

About USO of Metropolitan Washington
USO of Metropolitan Washington (USO-Metro) is a nonprofit 501(c)(3) organization chartered by Congress, and dedicated to “serving those who serve, and their families” in Washington D.C., Maryland and Northern Virginia. Through generous financial and in-kind support from individuals and organizations in the local community, USO-Metro is able to actualize its mission. With the help of nearly 5,000 devoted volunteers, USO-Metro provides programs and services for active duty troops and their families at area military hospitals, through its Mobile USO program, at five USO Centers, and four USO airport lounges. For more information please visit www.usometro.org or “like” us on Facebook and follow us on Twitter by searching USOMetroDC.