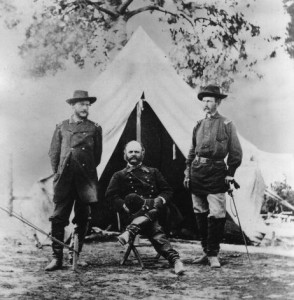 This post has been republished from the San Antonio Express-News

One hundred fifty years ago, a photographer from Washington, D.C. named Alexander Gardner traveled to the small town of Gettysburg, Pa. to photograph the aftermath of one of the bloodiest clashes in our nation’s history, the Battle of Gettysburg. It was some of the first war-time photography ever produced and it shocked the nation. Nearly every American had a connection to the war, yet it seemed the intensity of the Army’s sacrifice was all but lost on the nation until Gardner brought home those images of war.

On June 14, the U.S. Army celebrates its 238th Birthday. Our nation today does not suffer a shortage of images and videos of our Soldiers, but we have never been more distant from the realities of their service. Less than one percent of the country serves in the armed forces. Americans with immediate family members serving in uniform are fewer and fewer. We owe it to our Soldiers, ourselves, and to future generations to educate our citizenry about the profound sacrifices and extraordinary contributions of the U.S. Army in a way that is lasting and absolute.

A campaign is underway to construct the National Museum of the United States Army, the nation’s only museum to tell the complete history of the American Soldier from 1775. A true reflection of the Army itself, the National Army Museum will be a world class, state-of-the-art facility, interactive and highly engaging.

Visitors will experience the Army’s enduring fight to win and protect our nation’s freedom from the first shots of the Revolutionary War through today’s Global War on Terrorism. The Army and Society gallery will record the interaction between the country’s Army and its citizens, including the Army’s humanitarian efforts, the ever increasing diversity of the force, and the efforts of the American people to support their Soldiers.

Young visitors will immerse themselves in interactive programs that explore how the Army has advanced the fields of science, technology, engineering, mathematics and geography. The National Army Museum will be both a demonstration of our nation’s appreciation of its Army and a treasured educational institution.

The Army is America’s oldest and largest military service. Thirty million men and women have worn the Army uniform over 14 generations. When first established, the Army was little more than an assemblage of shopkeepers, farmers, bankers, ship builders and other colonists, of every walk of life. Yet they found the incredible courage and ceaseless spirit to rise and defeat a global power to secure our independence.

Future Army generations have sustained that independence through continued sacrifice. When our nation was still young, American Soldiers protected our citizens from renewed attacks from Europe. In the mid-19th century, they endured enormous hardships during the difficult years of America’s Civil War. The Army of our parents and grandparents denied violent regimes their ruthless quests for control of the world. Today, our Soldiers operate in complicated and uncertain battlefields, carrying out the longest conflict in our nation’s history as both courageous warriors and skilled diplomats.

Nearly two and half centuries of Army treasures have been collected and stored away, unseen by the public. Just as Americans of the Civil War era were changed by Gardner’s photos, our generation too will be in awe when we experience the totality of the Army’s history. We encourage all Americans to commemorate the Army’s Birthday by finding a way to get involved in supporting the National Army Museum. This honor for our Soldiers, and this investment in our own education, is long overdue.

General George W. Casey, Jr., U.S. Army (Ret.), served as the 36th Army Chief of Staff. He is a member of The Army Historical Foundation’s Board of Directors.

Joe Mantegna stars in Criminal Minds on CBS and has co-hosted the National Memorial Day Concert since 2002. He serves as the National Spokesperson for the Campaign to build the National Museum of the United States Army. To learn more, visit www.ArmyHistory.org.