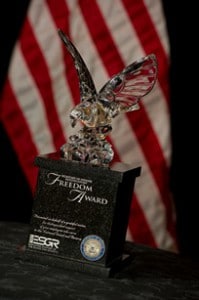 Just over one month remains for Guard and Reserve members to nominate their employers. The nomination process does not take long to complete and family members may submit nominations on a Guardsman or Reservist’s behalf. Employers of every size and industry are eligible. ESGR will accept nominations at www.FreedomAward.mil through January 21, 2013.

“Guard and Reserve members understand better than anyone how critical America’s employers are to our national security, which is why we look to them to tell us which employers deserve this distinguished honor,” said Ron Young, Executive Director, Employer Support of the Guard and Reserve. “We call on all Guardsmen and Reservists who have received outstanding support from their employer to nominate them for the 2013 Secretary of Defense Employer Support Freedom Award. There really is no better way to thank these employers for standing firmly behind our military men and women.”

The 2013 recipients will be announced in early summer and honored in Washington, DC during a ceremony next fall.  Recipients of the 2012 Freedom Award included diverse employers such as a telecommunications company, department of public safety, Midwest law firm, and small town church.

About ESGR and the Freedom Award:

The Freedom Award was instituted in 1996 under the auspices of ESGR to recognize exceptional support from the employer community. In the years since, 175 employers have been honored with the award. Established as a DoD agency 40 years ago, ESGR develops and maintains employer support for Guard and Reserve service. ESGR advocates relevant initiatives, recognizes outstanding support, increases awareness of applicable laws, and resolves conflict between service members and employers. Paramount to ESGR’s mission is encouraging employment of Guardsmen and Reservists who bring integrity, global perspective and proven leadership to the civilian workforce.

For questions or interviews regarding the Freedom Award, please contact Beth Sherman, ESGR Public Affairs, at 571-372-0705 or by email at ESGR-PA@osd.mil.