David Remembers His Grandfather as More Than Just a Good American 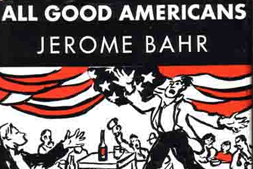 My grandfather, Jerome “Jerry” Bahr, was, by profession, a fiction writer. His first book of short stories, All Good Americans, published by Scribner’s and Sons, had the honor of receiving a preface by a rather well-known colleague of his, Ernest Hemingway.  (This was the only preface Hemingway wrote for an American short story writer.)

Since few are the writers who subsist on literary output alone, Jerry also found work serving in the Air Corps during World War II, most notably on the personal staff of Henry Harley “Hap” Arnold. Hap was then Chief of the Air Corps—forerunner of the United States Air Force—and needed some good writers.  Jerry, an intelligence officer, was tasked with writing the weekly roundup of Air Corps activities sent to President Roosevelt. Later, he was commissioned to write the then history of the U.S. Air Force, though it appears this work never was completed.

During the Cold War, my grandmother would follow Jerry to “Checkpoint Charlie” in East-West Berlin, where he was a public affairs officer for the U.S. Army, acting as a liaison between the German press and the American government. Of the many adventures my grandparents had during that tumultuous time, my grandmother is fond of remembering (with some anxiety) Jerry taking part in the historic confrontation between U.S. and Soviet tanks during October, 1961.

I am pleased to work for a public relations firm that is unparalleled in its work on behalf of military organizations. I am pleased further still to have discovered that I resume a professional occupation my grandfather engaged in some fifty years ago.