Dan Honors Our Nation’s Military Past By Helping Preserve It 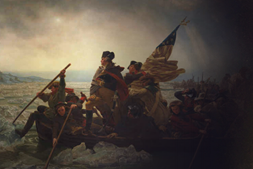 In the winters of the Revolutionary War, early Americans could track the movements of the Continental Army by the trail of blood the Soldiers’ chapped, uncovered feet left in the snow.

General George Washington’s urgent supply requests during the war were not for tactical material to give him the edge over the British, they were for survival: food, blankets, clothes. He once wrote that the Army was nearing the inevitable choice to dissolve, disperse, or starve.

These were the disparities of a young nation that by most measures had no business taking on the British with any expectation of winning.

The lack of resources was only exacerbated by the realities of the day. When Henry Knox was dispatched from Boston to Fort Ticonderoga to transport 59 artillery pieces – cannons of extraordinary weight and size – it took him weeks to make the arduous journey that is now less than four hours by car. Boats, sleds, carts, and teams of oxen, carried the tremendous load over unbroken ground and treacherous ice-coated rivers. When cannons fell through the ice, every effort was made to pull them from the frigid waters as each artillery piece would be vital for taking on the British.

The Continental Army was left wanting for nearly every basic need, yet they were the generation that won the independence we still celebrate. Time can lead us to forget that the technologically superior Army that protects us today is rooted in these most humble beginnings.

The only thread that runs unbroken from the Army of 1775 to the Army of today is the people who wear its uniform. The American revolutionists were driven to protect not just what they had, but what could be.  It takes extraordinary vision, leadership and selflessness to serve for the good of today, as well as the promise of tomorrow. Every generation of American Soldiers has embodied these traits, whether asserting our nation’s independence, arresting the influence of tyrants, or operating in a complex battleground without boundaries or frontlines.

The history of the U.S. Army tells us much about our own history. It also shows us what we are capable of as individuals and as a nation.

At SDI, I have been proud to support The Army Historical Foundation, the nonprofit leading the campaign to build the National Museum of the United States Army. This Museum will ensure Americans never forget the contributions of our nation’s oldest and largest military service, and the 30 million men and women who have called themselves an American Soldier.

The Army Historical Foundation is just one of many military clients I have been lucky to support – each with equally important missions. The contributions of our military clients are made only more meaningful as we commemorate National Military Appreciation Month.