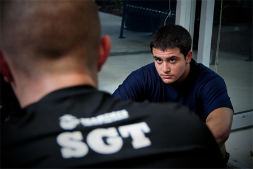 The earth is flat.
Money buys happiness.
Posttraumatic stress disorder (PTSD) is not real; it’s just in your head.

Some myths carry greater consequences than others. Myths about what PTSD is, who it affects, why you might have it and what can be done are unfortunately, common and harmful. Not being able to distinguish between fact and fiction can be the difference between living with hope and promise and living with despair for someone with the diagnosis.

Myth: Only Weak People Get PTSD

Identifying truths about PTSD is challenging given that it’s not easily understood either by someone experiencing the related psychological symptoms or by their family and friends. Being uninformed contributes to numerous misconceptions about the disorder, such as having PTSD means you’re not mentally tough. That plays particularly well in the military culture where standards of toughness are high and implemented with rigor.

Stress reactions to combat situations such as having nightmares, increased anxiety and reliving a traumatic event aren’t necessarily indicators of PTSD, but if they persist beyond a short-term period, it could result in a diagnosis. Some service members may be reluctant to acknowledge these symptoms for fear of being considered weak in character or unreliable, two further myths which keep them from seeking treatment and benefiting from support.

That treatment doesn’t work is one of the more damaging myths about PTSD. Treatment does work. Decades of research have produced many successful treatment therapies, such as cognitive processing therapy and prolonged exposure therapy, and identified early intervention as key to positive treatment outcomes.

One positive step you can take to understand and manage symptoms that may be associated with PTSD is to download “PTSD Coach,” a mobile app loaded with information and management and support resources.

Myth: Getting Care Will Hurt My Career

Many service members remain under the impression that receiving treatment will diminish or curtail their military career — another unfounded myth.

Military leaders continue to increase and impart their understanding of PTSD facts and how to effectively address unit members showing signs of psychological health concerns. Not seeking help once you become aware of problematic behavioral changes in yourself can be far more damaging. Behaviors associated with PTSD, like angry outbursts or attention deficits, can compromise your mission readiness or your unit’s trust in you. Courageous service members have come forward to share their experiences and recovery stories in Real Warriors Campaign video profiles, further challenging the myth that treatment doesn’t work.

Check out these resources for more PTSD myth-busters:

Learn about PTSD and do your part to raise awareness of the disorder by visiting the Department of Veterans Affairs National Center for PTSD website. Don’t spread myths about PTSD. Get the facts.