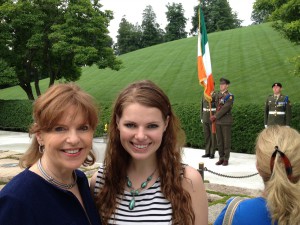 To celebrate the 50th anniversary of President John F. Kennedy’s visit to Ireland in June 1963, SDI supported the Irish Embassy by conducting media outreach for a special ceremony at Arlington National Cemetery on June 18.  The ceremony saw a flame lit from the Eternal Flame at the late President’s grave and then transported to a new quayside memorial in New Ross in Co. Wexford, Ireland, from where the Kennedy family’s Irish ancestors departed for America in 1848.

Irish Government Minister of State Paul Kehoe T.D. together with local public representatives from Wexford travelled from Ireland for the ceremony, which included colour parties from the U.S. Armed Services and Irish Defence Forces.

After Tuesday’s ceremony, the flame from President Kennedy’s grave was transferred to specially-commissioned ‘Kennedy Lamps’ for the journey to New Ross, Co. Wexford where  a new ‘Emigrant Flame’ memorial was dedicated on Saturday, June 22 in the presence of Irish Prime Minister Enda Kenny, Ms. Caroline Kennedy, and Ambassador Jean Kennedy Smith. Additional details about this and other celebrations of President Kennedy’s 1963 visit to Ireland are available at www.jfk50ireland.com.

Next week’s events in Ireland also take place as part of The Gathering 2013, a year-long programme of festivals, events and gatherings being organised by local people in every part of the country. More details are available at www.thegatheringireland.com.

Local, national and international media take their places before the ceremony